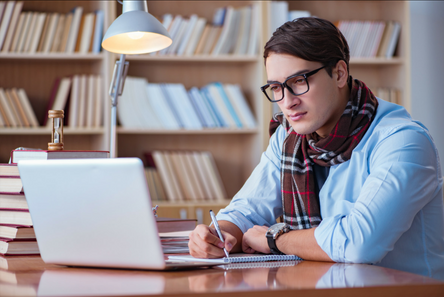 During the IFLA MetLib Conference 2017, held in Montréal (Canada) from April 30 to May 5, participants visited some of the best public libraries of the city. Dulcis in fundo, a great appendix to the program was a guided tour of two public libraries in Brossard and Longueuil, in the Greater Montréal area. The Georgette-Lepage Public Library in Brossard, with its drive towards innovation [1], had a great influence to some of the nearby cities, such as Longueuil. In this city I visited the Raymond-Lévesque Public Library, opened in 2011, with a remarkable green building designed by Jodoin Lamarre Pratte Architectes and atelier TAG. The building, in the Saint-Hubert neighborhood, is 3,957 sq. m. and cost 16.6 million Canadian dollars.

During the visit of the first floor, I noticed a study room with glass walls. Inside a man sat, concentrated, in front of a notebook and a large, colorful candy jar which immediately caught my attention. Our guide explained that he was Mathieu Blais, the current “writer-in-residence”[2]. Writers who participate in this project “find the library and its users to be very inspiring for their writing,” said Martin Dubois, manager of library services of the City of Longueuil. “The residence also prompts them to be very disciplined because they have to respect the agreed schedules and to be in the room. They are less distracted than being at home” [3].

The project was launched five years ago by the Conseil des Arts de Longueuil, an institution which supports the development and promotion of arts (literature included) in Longueuil. The Raymond-Lévesque Public Library is a natural partner, together with a local bookstore, ALire, which provides a grant to the author. By the way, “partnerships” was the topic of this year’s MetLib Conference. After attending many presentations which explored how “almost anyone can be a partner” in Québec and in other regions of the world [4], I could then see with my eyes a real ongoing partnership.

Writers respond to a call for proposals which are examined by a jury. In addition to the 25 hours per week in the library during a two month period, the writer also commits to a series of activities, such as seminars about literary writing. “Not all the authors are comfortable interacting with people […]” Dubois said. “Users are often shy to meet the author because they are afraid of bothering him”. [5]

And the candies? “They are my source of inspiration,” Blais said to me.

[2] Mathieu Blais was born in Montréal in 1979. His website is http://mathieublais.ca

[4] Quotation by Kimber L. Fender, from her presentation Howdy partner! Developing library/community partnerships, delivered on May 2, 2017. All the presentations are available at http://metlib2017montreal.org/en/downloads/ . The IFLA MetLib Conference is the annual conference of the IFLA Section on Metropolitan Libraries.